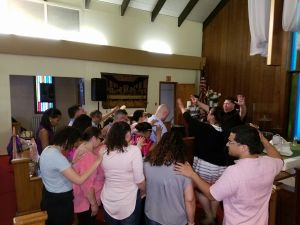 More than one church He said….

We have already doubled. God is good.

In order to activate those gifts that God gives, you must become connected.

WHO ARE YOU CONNECTED TO?

The Call of Elisha

So Elijah went from there and found Elisha son of Shaphat. He was plowing with twelve yoke of oxen, and he himself was driving the twelfth pair. Elijah went up to him and threw his cloak around him. Elisha then left his oxen and ran after Elijah. “Let me kiss my father and mother goodbye,” he said, “and then I will come with you.”
“Go back,” Elijah replied. “What have I done to you?”
So Elisha left him and went back. He took his yoke of oxen and slaughtered them. He burned the plowing equipment to cook the meat and gave it to the people, and they ate. Then he set out to follow Elijah and became his servant.
1 Kings 19:19-21 (New International Version)

This is what it means to be engaged to the call. Take on these characteristics and God will be obligated to bless you.

This is a story of a master of networking. Because of this, the ministry of Elisha was extended. In time he would reach many…. that is powerful.

We want to leave a mark but most of us have yet to scratch the surface with our spiritual leaders. It is not just to be effective but CONSISTENT. If you are consistent this demonstrates your dependability.

Blessings to all that are viewing this. My name is Christina Cruz-Mendez. I am a Pastor at Mission United International Church in Yonkers, NY working along side my husband Juan A. Mendez Jr. Senior Pastor. We have been together for 27 years with 2 children that God has blessed us with. Makes us the family of four - "JusChrist4". I have been a Christian and active in ministry for about 19 years now. Through all the rocky and smooth roads in life I am eternally grateful that God has brought me this far in life to share with the world what He is doing in me, through me and for me. View more posts