Against all hope, Abraham in hope believed and so became the father of many nations, just as it had been said to him, “So shall your offspring be.” Without weakening in his faith, he faced the fact that his body was as good as dead—since he was about a hundred years old—and that Sarah’s womb was also dead. Yet he did not waver through unbelief regarding the promise of God, but was strengthened in his faith and gave glory to God, being fully persuaded that God had power to do what He had promised. This is why “it was credited to him as righteousness.”
Romans 4:18-22

I remember some time about 3 years prior that we were about to be senior pastors of our church and we had no idea what we were going to do with our current situation. We were going through another serious rough patch. My husband and I decided to have lunch on 12/31 before we went into the new year and he said these words to me that propelled us into our destiny. I will never forget them…

Six months later, we became the senior pastors of MUI Church, Yonkers. Did that stop our trials and tribulations? Did that make our issues and trying times disappear? NO– it did not. In fact, can I share this–things got worse before they got better!

We were against all hope! Yet did not waver at the promise!

In making any difficult decision, we will typically encounter MORE opposition. The reason that we encounter such opposition is so that we become stronger. You don’t grow strong over weak circumstances and happy bliss fairy tales. You grow stronger by overcoming trials! We are not just made to conquer but we are made to be MORE than conquerors. Meaning that we will be known for the battles we have won and not just one but many!

I was reading in the book, “Four Doors” by Richard Paul Evans where he wrote the following profound statement as it relates to adversity. 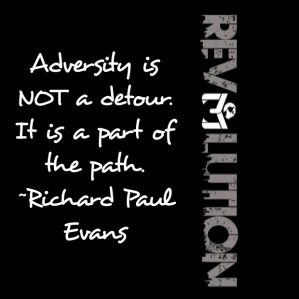 That seemed to be the case always for me. The adversity that I have faced never bypassed me. It actually came most times to try and overtake me. Issues seemed unbearable and overwhelming. But even through all that, I had a keen vision to see an ocean of possibilities that God would do what He said that He would do. Not what I could do…because our human strength is so flawed BUT through God—we do valiantly! Through God we do triumphantly. Through God we are able. He is the MAIN DOOR that I will always dare and choose to walk through.

It is always going to be some sort of a fight. We can do it. But we have to be so dependent upon God as we do things. He is with us and in us. Yes, He is fighting for us but we will see the effort that we have to put in using the Word as our weapon for warfare! There will always be a fight and that is when we will experience the victory.

For though we live in the world, we do not wage war as the world does. The weapons we fight with are not the weapons of the world. On the contrary, they have divine power to demolish strongholds. We demolish arguments and every pretension that sets itself up against the knowledge of God, and we take captive every thought to make it obedient to Christ. And we will be ready to punish every act of disobedience, once your obedience is complete.
2 Corinthians 10:3-6

We have the power to demolish everything that comes against the Word of God and against the promises that He has given us. We need to confess and believe that the same way that Abraham did. We have weapons in order to combat the adversity that so strongly presses upon that promise.

Be reminded that when the enemy comes at you to challenge your destiny and purpose that you have the strongest weapons ever that WORK! When situations look as good as dead… When things look impossible… When you feel like you have come against all hope–use the (S)WORD and cut it down.

Finally, my brethren, be strong in the Lord and in the power of His might. Put on the whole armor of God, that you may be able to stand against the wiles of the devil. For we do not wrestle against flesh and blood, but against principalities, against powers, against the rulers of the darkness of this age, against spiritual hosts of wickedness in the heavenly places. Therefore take up the whole armor of God, that you may be able to withstand in the evil day, and having done all, to stand. Stand therefore, having girded your waist with truth, having put on the breastplate of righteousness, and having shod your feet with the preparation of the gospel of peace; above all, taking the shield of faith with which you will be able to quench all the fiery darts of the wicked one. And take the helmet of salvation, and the sword of the Spirit, which is the word of God; praying always with all prayer and supplication in the Spirit, being watchful to this end with all perseverance and supplication for all the saints— and for me, that utterance may be given to me, that I may open my mouth boldly to make known the mystery of the gospel, for which I am an ambassador in chains; that in it I may speak boldly, as I ought to speak.
Ephesians 6:10-20

Blessings to all that are viewing this. My name is Christina Cruz-Mendez. I am a Pastor at Mission United International Church in Yonkers, NY working along side my husband Juan A. Mendez Jr. Senior Pastor. We have been together for 27 years with 2 children that God has blessed us with. Makes us the family of four - "JusChrist4". I have been a Christian and active in ministry for about 19 years now. Through all the rocky and smooth roads in life I am eternally grateful that God has brought me this far in life to share with the world what He is doing in me, through me and for me. END_OF_DOCUMENT_TOKEN_TO_BE_REPLACED
This entry was posted on Monday, December 28th, 2015 at 4:05 pm and posted in Encouragement, Faith. You can follow any responses to this entry through the RSS 2.0 feed.
« The Last Sunday
Can You Bear It? »

5 responses to “Against All Hope”