Powerful prayers can be in many forms. It is not always about how loud you pray or how eloquent the words are–in the end it is simply having a conversation with God and spending time in His presence. Sometimes in conversation we are excited, sad, with fewer words or with many. It really all ranges on the moment. In any case, THEY ALL WORK! Just pray because He hears it all and just wants us to spend that precious quality time with Him. Talk to God… YES! About anything and everything.

“Devote yourselves to prayer, being watchful and thankful.” Colossians 4:2 NIV

“Be joyful in hope, patient in affliction, faithful in prayer.” Romans 12:12 NIV 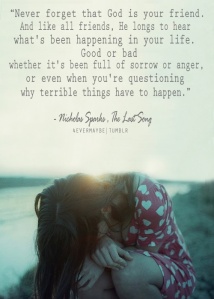 This reminds us not to give up. Never to quit. To travail and make our prayers ardent. Corrie Ten Boom stated, “Is prayer your steering wheel or is it your spare tire?” Do we talk to someone and only reach out when we have a problem? That should never be the case when it comes to matters of the heart or with people that you care for. With that being said, God should be the utmost for your list of favorite people to converse with. Just ask Him, “Hear my cry, O God; listen to my prayer.” Psalm 61:1

Powerful things happen when we pray too! Prayer changes things. Prayer moves mountains in our lives. The same way the apostles prayed often in the book of Acts. They saw God move on their behalf. Look at what prayer does for us.

Fills us with the Holy Spirit

“And when they had prayed, the place where they were assembled together was shaken; and they were all filled with the Holy Spirit, and they spoke the word of God with boldness.”
Acts 4:31

“So when they had appointed elders in every church, and prayed with fasting, they commended them to the Lord in whom they had believed.”
Acts 14:23

“And David built there an altar to the Lord, and offered burnt offerings and peace offerings. So the Lord heeded the prayers for the land, and the plague was withdrawn from Israel.”
2 Samuel 24:25

“Peter was therefore kept in prison, but constant prayer was offered to God for him by the church. And when Herod was about to bring him out, that night Peter was sleeping, bound with two chains between two soldiers; and the guards before the door were keeping the prison. Now behold, an angel of the Lord stood by him, and a light shone in the prison; and he struck Peter on the side and raised him up, saying, “Arise quickly!” And his chains fell off his hands. Then the angel said to him, “Gird yourself and tie on your sandals”; and so he did. And he said to him, “Put on your garment and follow me.” So he went out and followed him, and did not know that what was done by the angel was real, but thought he was seeing a vision. When they were past the first and the second guard posts, they came to the iron gate that leads to the city, which opened to them of its own accord; and they went out and went down one street, and immediately the angel departed from him.  And when Peter had come to himself, he said, “Now I know for certain that the Lord has sent His angel, and has delivered me from the hand of Herod and from all the expectation of the Jewish people.”
Acts 12:5-14

“Who, in the days of His flesh, when He had offered up prayers and supplications, with vehement cries and tears to Him who was able to save Him from death, and was heard because of His godly fear…”
Hebrews 5:7

“So Abraham prayed to God; and God healed Abimelech, his wife, and his female servants. Then they bore children; for the Lord had closed up all the wombs of the house of Abimelech because of Sarah, Abraham’s wife”
Genesis 20:17-18

“And seek the peace of the city where I have caused you to be carried away captive, and pray to the Lord for it; for in its peace you will have peace.”
Jeremiah 29:7

No matter what the need is during that very moment, it could be a difficult situation or it could just be a time of rest. As we talk to God, we can be assured that He will be responding on our behalf. And never feel like you are not good enough or holy enough for prayer. For all these things Christ has done [Ephesians 2:13] so that we CAN DRAW NEAR to God and He will draw near to us [James 4:8]. It doesn’t matter what the form either–there is no protocol but action! Men and women in the bible knelt, laid prostrate, cried, stood, sat and even whispered during their prayer times. God heard them ALL. The same way He hears you! Now that makes such a powerful prayer indeed…

Blessings to all that are viewing this. My name is Christina Cruz-Mendez. I am a Senior Pastor at Mission United International Church in Yonkers, NY working along side my husband Juan A. Mendez Jr. Senior Pastor, currently residing in Canton, Georgia. We have been together for 29 years with 2 children that God has blessed us with. Makes us the family of four - "JusChrist4". I have been a Christian and active in ministry for about 22 years now. Through all the rocky and smooth roads in life I am eternally grateful that God has brought me this far in life to share with the world what He is doing in me, through me and for me. END_OF_DOCUMENT_TOKEN_TO_BE_REPLACED
This entry was posted on Wednesday, August 26th, 2015 at 4:53 pm and tagged with powerful prayers and posted in Encouragement, Inspiration, Prayer. You can follow any responses to this entry through the RSS 2.0 feed.
« LOVE Never Fails
Destroy It! »

One response to “Powerful Prayers”