There is a serious case in the Bible where the disciples came to Jesus and asked Him, “How many times shall I forgive my brother?” And Jesus said to him, “Up to 70×7!” I translate this in so many ways but what I understand repeatedly is an infinite number.

“Then Peter came to Him and said, “Lord, how often shall my brother sin against me, and I forgive him? Up to seven times?” Jesus said to him, “I do not say to you, up to seven times, but up to seventy times seven.”
‭‭Matthew‬ ‭18:21-22‬ ‭NKJV‬‬

You see a lot of times are always asking God the same exact questions over and over again, especially when we don’t see results happening in our lives. So the same way the disciples came to Jesus and asked Him how many times, is the same way we actually go to God and ask Him the same thing too. This becomes an infinite type of situation.
Infinite is immeasurably great or exceedingly great. It is something we cannot measure. Something that goes beyond our capacity to comprehend fully. We just keep coming back to a never-ending road block.
Maybe some never-ending giant, problem, thorn, past pain or ailment. It seems unyielding, undeniably and uncomprehending. It brings confusion, chaos and the like. Creating our own fortified place in our minds. The stronghold has been built.
There are so many different “Giants” that we have to face in our lives and diverse situations. There only seems to be a solution of asking God or others those very same questions. We ask, “How long, why, when or what?”
It becomes our own infinite number.
The Apostle Paul even had this issue because he pleaded with God three times if he would remove a particular weakness that he had. God told him that he would stay with that weakness because it would only show him the strength of God!

“And lest I should be exalted above measure by the abundance of the revelations, a thorn in the flesh was given to me, a messenger of Satan to buffet me, lest I be exalted above measure. Concerning this thing I pleaded with the Lord three times that it might depart from me. And He said to me, “My grace is sufficient for you, for My strength is made perfect in weakness.” Therefore most gladly I will rather boast in my infirmities, that the power of Christ may rest upon me.”
‭‭II Corinthians‬ ‭12:7-9‬ ‭NKJV‬‬

“So the LORD said to Cain, “Why are you angry? And why has your countenance fallen? If you do well, will you not be accepted? And if you do not do well, sin lies at the door. And its desire is for you, but you should rule over it.” Now Cain talked with Abel his brother; and it came to pass, when they were in the field, that Cain rose up against Abel his brother and killed him.”
‭‭Genesis‬ ‭4:6-8‬ ‭NKJV‬‬

When that infinite situation appears to you repeatedly…. You can and shall rule over it! You have been given the ability to do so. You can get through it. You can overcome. You can dance in the rain. You can smile over your enemies. You can do all that God called you to do, because He is in you! Do all that you need to do!
Believe that! This is the time to believe! Even if it looks bleak–BELIEVE!
God believes more in us then we do! That is why He gave it to us. He has given us so much in advance because He knows we are more than capable through Him.

“Let us not become weary in doing good, for at the proper time we will reap a harvest if we do not give up.”
‭‭Galatians‬ ‭6:9‬ ‭NIV‬‬

Keep doing that good thing–at the proper (God) time, you are going to reap a harvest. You CAN’T give up! Not now, not ever! In that infinite number of yours–God will do the immeasurable thing! If it doesn’t look resolved, like it is fixed, like it is getting better or going to progress–God is all over that situation saying IN THIS very thing, I am in it.
Trust Me! 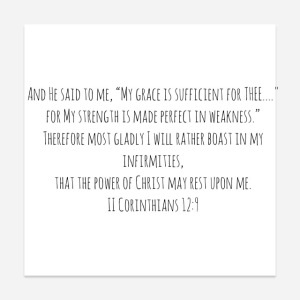 Blessings to all that are viewing this. My name is Christina Cruz-Mendez. I am a Pastor at Mission United International Church in Yonkers, NY working along side my husband Juan A. Mendez Jr. Senior Pastor. We have been together for 27 years with 2 children that God has blessed us with. Makes us the family of four - "JusChrist4". I have been a Christian and active in ministry for about 19 years now. Through all the rocky and smooth roads in life I am eternally grateful that God has brought me this far in life to share with the world what He is doing in me, through me and for me. View more posts