I was visiting another church for a special service they were having and was so taken by the structure of the building. Shortly after arriving I became so fixated with the high ceiling. As they were doing the altar call, I was brought to the passage in the bible where the men broke through the ceiling just to bring their friend to Jesus the healer.

What these men did in a moment. They heard that Jesus was about doing miracles, signs and wonders and didn’t just bring themselves, but another to be healed. The place was so packed that they broke through the ceiling to slowly lower him into the place where Jesus was. Wow! What a fervency these people had! I think in these days we have become so diluted with our faith that we would not go to such extremes as this.

Are we so settled and complacent in our life circumstances? How far would we go for a breakthrough? Especially when we are in dire need. Would we go to such measures to bypass all… just to get to the feet of Jesus with our petition? Would we spend all? Would we leave it all? Would we push through all?

How far do we go?

In my beginning years of Christianity, this was one of the first 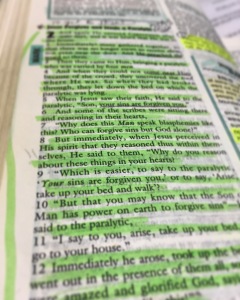 passages read during my church attendance. I highlighted the entire passage in green. My husband would tell me, “You should highlight the entire bible!” I said, “THIS IS important!”

And so it depicts such a GREAT faith that the men possessed to have this man receive his healing. He must have been in this situation for some time that he so desperately needed this miracle to happen for him. Some of us carry our issues way too long. Are you ready to break-through?

And again He entered Capernaum after some days, and it was heard that He was in the house. Immediately many gathered together, so that there was no longer room to receive them, not even near the door. And He preached the word to them. Then they came to Him, bringing a paralytic who was carried by four men. And when they could not come near Him, because of the crowd, they uncovered the roof where He was. So when they had broken through, they let down the bed on which the paralytic was lying. When Jesus saw their faith, He said to the paralytic, “Son, your sins are forgiven you.” And some of the scribes were sitting there and reasoning in their hearts, “Why does this Man speak blasphemies like this? Who can forgive sins but God alone?” But immediately, when Jesus perceived in His spirit that they reasoned thus within themselves, He said to them, “Why do you reason about these things in your hearts? Which is easier, to say to the paralytic, ‘Your sins are forgiven you,’ or to say, ‘Arise, take up your bed and walk’? But that you may know that the Son of Man has power on earth to forgive sins” –He said to the paralytic, “I say to you, arise, take up your bed, and go to your house.” Immediately he arose, took up the bed, and went out in the presence of them all, so that all were amazed and glorified God, saying, “We never saw anything like this!”
Mark 2:1-12

As I am typing this, the spirit points out in order to complete the five-fold you have to carry the ONE!

Getting to God is vital! In this particular case, there was one of the five that needed a true miracle! The one that seems to be the worst actually walks away the most victorious, the most power-full, the most forgiven, and the most that will carry the works of the Lord to the farthest places.

In the presence of God, immediately he was safe.

In the presence of God, immediately he was accepted.

In the presence of God, immediately he was forgiven.

In the presence of God, immediately he was healed.

In the presence of God, immediately he was able to rise and go before all to be a living witness!

That didn’t take a whole year, months of training or shaping. He was able to stand forward and declare the mighty hand of God. For God to do a miracle in your life –when you push past all the barriers and hindrances you are on your way to that victory! When you feel like you can’t get in or you can’t win–God is there waiting for you. There is no “too many” situations that He won’t look upon yours!

When we line up our petition with our faith and seek the One who is able to do the miracle, it happens for us! Our breakthrough is there. But we must be persistent in a thing! In the passage of Mark we see that the building that Jesus was teaching was so packed that there was no room for people to even stand by the entrance way. Too bad this is not the case for church attendance today. People sleep in the street outside the Apple stores the night before the latest phone drops to get what they want….a new technology! Would they ever do the same to get to the house of Worship. So nonchalantly the people say, “EH! Not today….”

Why not try a new technique with God and wait for Him to show up on your behalf! Maybe you are not where you want to be because you haven’t done what you are supposed to do. Is that cause for a breakthrough?

Just show up! Get before the face of God for your miracle. And if you need help getting there–find the few to help. There is no shame in asking for help, especially when we need it the most. We ALL have requests.

And in our time, there will be that BREAK-THROUGH!!!!

Blessings to all that are viewing this. My name is Christina Cruz-Mendez. I am a Pastor at Mission United International Church in Yonkers, NY working along side my husband Juan A. Mendez Jr. Senior Pastor. We have been together for 27 years with 2 children that God has blessed us with. Makes us the family of four - "JusChrist4". I have been a Christian and active in ministry for about 19 years now. Through all the rocky and smooth roads in life I am eternally grateful that God has brought me this far in life to share with the world what He is doing in me, through me and for me. END_OF_DOCUMENT_TOKEN_TO_BE_REPLACED
This entry was posted on Tuesday, October 13th, 2015 at 1:07 am and tagged with YOUR BREAKTHROUGH and posted in Encouragement, Faith, Inspiration. You can follow any responses to this entry through the RSS 2.0 feed.
« Food Is Fuel
Have You Tried Fasting? »

One response to “Break-THROUGH!”